skip to main | skip to sidebar

My mother accepted the change from wife to widow with great grace. Within a year of Dad's death, Mom sold the home and moved into an apartment becoming the independent woman. Granted, the apartment was not far from the family home and from my sister who lived a few houses down the block. Mom created her card playing social circle, continued to sew and read, and became the unofficial 'ear' for the other women in the apartment. Mom listened and helped.

When Mom's car had more scraps and dents than Maaco wanted to tackle....when the concrete curbs and telephone poles were marked with red auto paint....when Pete, the mechanic, could no longer accept her business...the time had come. We had to sell her car.

Time isn't gentle and Mom's decline went far too quickly. She left the apartment for assisted living. Even after she was moved to the locked-door Alzheimer wing of the facility, Mom continued to enjoy going 'for a ride' often asking that we circle Wyandotte County Lake where she and Dad had enjoyed fishing. She loved the Fall colors. She loved the search for Bittersweet to decorate her night stand. Often, she wanted the window down so she could smell the dampness.

Eventually, the rides to the lake would end almost before they began. We would get to the Manor's parking lot exit ramp and Mom would say it was time to go home now...before it got to dark to see any more colors. Mom thought we had already looked at the spill-way where she always remembered the stories of Mark's climbing escapades. She thought we had looked at the beautiful oranges, yellows and reds that she called
nature's best.

But Mom never lost nature's best colors. That might be why this time of year feels so soft and looks so glorious...and why my face is wet with memory.
Posted by Pat at 12:49 PM

What a lovely tribute to your Mom. I loved reading this, what it meant to you and to her. Bless you.

To order the book 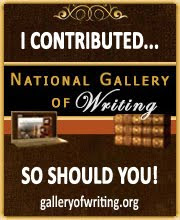